Megan McKenna, a native of New York City has lived, visited and gypsied through North and South America (especially Bolivia/Peru), Europe and a collection of islands: Celtic, Japanese, the Philippines, Singapore, Haiti and the Hawaiian Islands and through Malaysia, India, Marshall Islands, Thailand, Australia and China. She works with Indigenous groups, in base Christian Communities and with justice and peace groups as well as parishes, dioceses and religious communities. She has been on the United States National Board of Pax Christi and in 2002 was appointed an Ambassador of Peace for Pax Christi.

An internationally known author, theologian, storyteller and lecturer, she teaches at several colleges and universities and does retreats, workshops and parish missions. She has graduate degrees in Scripture, Adult Education and Literacy from the Graduate Theological Union and the University of California, Berkeley, and a Masters in Systematic Theology from Catholic University, Washington, DC But foremost she is a lover of words: the Scriptures, stories and tales, poetry, images and phrases spoken aloud, written down and spun to make meaning and how these both convert and transform us and bring meaning and hope to the world.

She has authored more than thirty books, including And Morning Came: Scriptures of the Resurrection, Praying the Rosary, Send My Roots Rain, The New Stations of the Cross, On Your Mark: Reading Mark in the Shadow of the Cross, and the recently released, Harm Not The Earth. She resides in Albuquerque, NM.

In the Southwest there has always been the tradition of the

Storyteller in each tribe, pueblo and community among the Native Peoples. They held a position of authority and honor, binding the generations together, keeping the traditions and beliefs and practices of the people vital and asking the questions that were crucial to survival in their geographical area, in regards to animals, water, vegetation, weather and crops that were rotated. Many were women though there were men tellers, and they took on apprentices, passing on the oral history, knowledge and wisdom of plants that healed, long ago experienced events and ways of keeping members in the community acting with respect to the Great Spirit and to one another. They often served as bridges between tribes, negotiating for peace and keeping lines of communication open.

The art and craft of pottery also was practiced for over thousands of years and it became the custom to fashion a storyteller usually sitting on the ground, with her head leaning back, her mouth open, telling and letting her spirit mix with the Great Spirit. Originally there were only figures of children at her feet, on her shoulders, climbing up and down on her. The number of children indicated the number of stories that particular teller was noted for, either telling or creating. In more recent years animals have been added or plants held in hands and other symbols. There are storytelling dolls that are life-size and larger than a human being, with hundreds and hundreds of children crawling up and down the figure, kept in pueblos in the South west and in museums. They were given to the Storyteller by the pueblo. It has been a great honor for me to have been given a number of these figures. This symbol, for me, has always been an announcement, a proclamation of good news, of holding the community together, of calling it to its deepest life and spirituality and of teaching the values and integrity of beliefs from one generation to the next. The Storyteller is good news, is faithfulness and enduring grace through suffering and history, remembering and sharing life and hope, a presence among the people telling the Story over and over again….so everything begins, even in our religion….In the beginning was the word….once upon a time….as the old ones say….did you hear? Come, listen…continue the story, make it come true….as you come true.

Megan’s family members gather to reminisce as they read her recent book, Playing Poker with Nana. 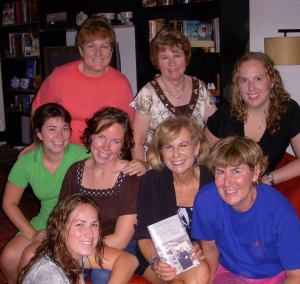 To view Megan’s entire Family Album, click here.   NOTE: Once on the page, if you click on the photos one by one, they will enlarge and the person/s in the photo will be identified.